Indianapolis native set to drive the No. 25 U.S. Air Force Honda for second time in 2019

INDIANAPOLIS (Thursday, August 8, 2019) — Andretti Autosport and the United States Air Force announced today that Conor Daly will be returning to drive the No. 25 U.S. Air Force Honda for the all-American team at the NTT IndyCar Series season finale at WeatherTech Raceway Laguna Seca in late September. The Indianapolis native will pilot a fifth entry for the team.

Daly made his sixth Indy 500 start in the 103rd Running of the Indianapolis 500 with Andretti Autosport, qualifying in 11th and finished 10th, his career-best start and finish for the famed 500-mile race.  The second-generation racer holds wins in both Indy Lights and the Pro Mazda (now Indy Pro 2000) series and claimed the 2010 Pro Mazda championship. Daly holds 46 career IndyCar Series starts with 11 top-10 finishes.

“I couldn’t be more excited to get back to my road course routes and take on Laguna Seca with Andretti Autosport and the United States Air Force,” said Daly.  “It’s been incredible to be a part of the team this year carrying the USAF colors and to represent them at the season finale will be very special.  I’m very proud of what we’ve been able to do with the USAF this year on and off the track and I can’t wait to get back in the No. 25 car!”

The United States Air Force served as Daly’s primary sponsor at the Indianapolis 500 and has been an associate sponsor for Andretti Autosport all season with branding featured across the team’s four full-season entries of Alexander Rossi, Ryan Hunter-Reay, Marco Andretti and Zach Veach.

“We are thrilled to have Conor, as well as the U.S. Air Force, join us again for the season finale in Laguna Seca,” said Michael Andretti, CEO, Andretti Autosport. “Conor was a great addition during the month of May and being able to continue this great partnership with the Air Force at the series season finale is another special opportunity to show our support and honor the brave men and women serving our Nation.”

“We were extremely proud of the effort that Conor (Daly) and the entire Andretti Autosport Team put in for the Indianapolis 500,” said Maj Ross McKnight, Chief Air Force National Events Branch. “The activation exceeded all Air Force Recruiting objectives and we are excited to continue that success at Laguna Seca and the IndyCar season finale.”

The season finale for the NTT IndyCar Series will broadcast live Sunday, September 22, on NBC with the green flag dropping at 2:30 p.m. ET. 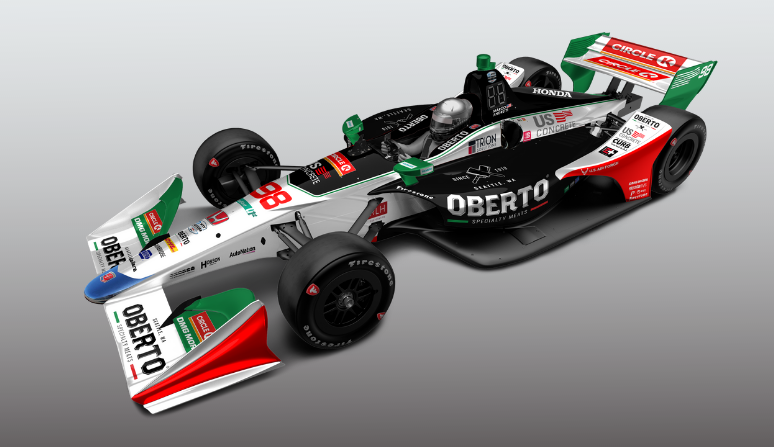 INDIANAPOLIS (Wednesday, August 7, 2019) — For a third consecutive year, Oberto Specialty Meats will paint the No. 98 racing machine of Marco Andretti in their iconic black, red and green colors – this year for two NTT IndyCar Series races; the Bommarito Automotive Group 500 held at World Wide Technology Raceway at Gateway and the Grand Prix of Portland at Portland International Raceway. Andretti previously represented Oberto & Circle K at the inaugural INDYCAR event at World Wide Technology Raceway in 2017, as well as at the 2018 Honda Indy Toronto. Additionally, the No. 98 ran a special Oberto & Circle K adorned throwback livery for the 2018 Phoenix International Raceway event.

It’s a big year for Oberto Specialty Meats, as they introduce a broad range of new products, including charcuterie and sausages, as well as new packaging that highlights the company’s 101-year heritage. The artwork, which will be reflected on the Andretti Autosport race car, features a new logo containing a pair of meat cleavers, the words “Since 1918.”

“Oberto Specialty Meats is all about quality, craftsmanship and heritage and we can’t think of anyone who better embodies those values than Andretti Autosport,” said Oberto CEO Tom Hernquist.

The partnership with Oberto and Circle K has been diverse through the years.  The  two companies have served as primary sponsor for not only Andretti Autosport and Marco Andretti, but also with Andretti Rallycross for four-time U.S. rally cross champion Scott Speed.

“We are thrilled to keep building on our partnership with Oberto and their retail partner Circle K,” said Andretti Autosport CEO Michael Andretti. “They have been involved across the team on many platforms and together we have created a lot of special memories, like Marco’s throwback livery at Phoenix and rally cross championships. It’s great to keep them in our family of partners and see them highlighted on the cars each year.”

Andretti will climb in the cockpit of his No. 98 Oberto Circle K / Curb Honda at the Bommarito Automotive Group 500 alongside teammates Ryan Hunter-Reay, Alexander Rossi and Zach Veach for the third-annual night race at World Wide Technology Raceway at Gateway on Saturday, August 24. Coverage of the 248-lap race will be available on NBC Sports Network beginning at 8 p.m. ET.

The following weekend, the team will head up to Portland, Oregon, for the Grand Prix of Portland. NBC will broadcast coverage live from Portland International Speedway on Sunday, September 1, at 3 p.m. ET.

HONDA INDY 200 AT MID-OHIO RACE REPORT 07.28.2019 With the checkered flag on the Honda Indy 200 at Mid-Ohio, Round 14 of NTT IndyCar Series competition is in the books and for the second year in a row the 90-lap event was run without caution periods. After a well-executed three-stop pit strategy, Ryan Hunter-Reay goes…

“Looking back at [qualifying], Will [Power] did a really slow first lap of his two-lap run, and I did two push laps in a row. I think I ran out of tire because they were used Firestones by the time I got halfway through the lap and that’s where the deficit came from. A little bit better of a strategy call they made than us, but I think our race car is great. The boys have done a really good job overnight – we struggled yesterday. The NAPA Andretti Honda boys put their heads together and made it happen today, and the front row is a good place to start.”

“After [Practice 1] we knew we needed some speed, so we threw some setup changes at it. I think the car was pretty decent. We advanced on to the top 12 and then got too aggressive with the front of the car and missed the [Firestone] Fast Six. We just came up a bit shy today, but we’re still inside the top 10 and we’ll do our best to turn that into a fight for the DHL team.”

“We wanted more out of qualifying but didn’t have the setup to get us there. We were loose on entry and couldn’t pick up the speed. We need to concentrate on containing the rear [of the car] for the race and get creative with strategy to move our way up.”

“It was a frustrating day. We missed it again. We have really been struggling getting the right feeling underneath us. It’s going to be a frustrating race starting where we are on the grid. It is how this year has gone. We just need to figure out how to make changes that will allow us to move forward.”

NTT INDYCAR SERIES OF NOTE: Defending race-winner Alexander Rossi looks for a return to the podium at Mid-Ohio to tighten the championship points gap. Rossi enters the race weekend trailing points leader Josef Newgarden by 29 points. Fresh off his third top-10 finish of the season and best finish of 2019, Zach Veach looks to carry momentum for a…

IOWA 300 RACE REPORT 07.20.2019 Iowa Speedway brought the heat Friday but Saturday was all about the rain. Evening showers spoiled the original start of the Iowa 300, delaying the start time by almost four hours. With only one brief red flag for a lingering sprinkle of rain, the 300-lap event was run at full…

ANDRETTI AUTOSPORT RACE PREVIEW NTT INDYCAR SERIES IOWA 300 NTT INDYCAR SERIES OF NOTE: The Andretti Autosport stable has claimed seven of 12 wins at Iowa Speedway, once holding a six-year win streak Ryan Hunter-Reay holds the most wins of any INDYCAR driver at Iowa Speedway, recording three victories on the short oval (2012, 2014, 2015) With his…

NTT INDYCAR SERIES HONDA INDY TORONTO RACE REPORT 07.14.2019 The 85-lap race, bookended by full course cautions, saw many different strategies playing out through the field. But it was the strategy of those that led the field to the green flag that prevailed, earning their podium-finishes. The team quickly heads back to Indianapolis to turn…