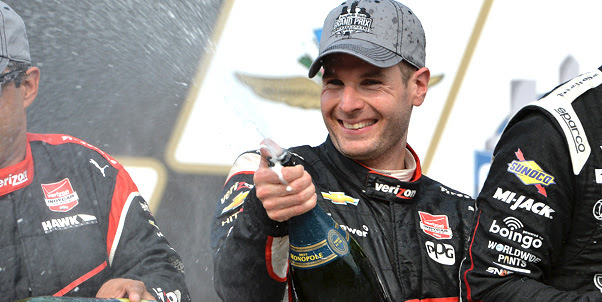 INDIANAPOLIS, Saturday, May 9, 2015 – Threatening skies cleared just in time for the start of the second annual Angie’s List Grand Prix of Indianapolis, and soon after that something else became clear on Saturday at the Indianapolis Motor Speedway.

No one was better than Will Power.

The driver of the No. 1 Verizon Team Penske Chevrolet set a qualifying record Friday on the 14-turn, 2.439-mile IMS road course, then backed up that pole effort with a dominant race victory. The Australian led 65 of 82 laps and won by 1.5023 seconds over Graham Rahal, a runner-up for the second consecutive race in the No. 15 Steak ‘n Shake Honda of Rahal Letterman Lanigan Racing. Juan Pablo Montoya, the 2000 Indianapolis 500 champion, finished third.

“I’m really happy to win here at this awesome facility,” said Power, the defending Verizon IndyCar Series champion. “If you always put yourself in that position to win, eventually it is going to come.

After the race, thousands of fans hit the road course for a Track Invasion, with many of those stopping to take a picture or steal a kiss on the famed Yard of Bricks. The Track Invasion – the first after a race at IMS – was the final piece of a full weekend of opportunities for fans to get up close and personal with the road course event.

The Indianapolis Motor Speedway will be closed on Sunday for Mother’s Day and then will reopen on Monday as preparations for the 99th Running of the Indianapolis 500 begin.

“I was very determined to start this month off really well and we got pole and we won,” Power said. “Now we’ve got pole to aim for in the ‘500.’”

Schedule change: Monday’s practice schedule for the Indianapolis 500 has changed and will now feature rookie orientation and refresher tests from Noon-1 p.m. and, after a one-hour break, full-field practice from 2-7 p.m. The change adds an extra hour of full-field evening practice.

Castroneves finished sixth on Saturday in the No. 3 Verizon Team Penske Chevrolet, battling back from an incident in the first turn of the first lap, where he made contact with Scott Dixon.

The Team Penske driver’s first Indy car start was the Grand Prix of Miami at Homestead-Miami Speedway in March 1998. Also making his debut in that race was Tony Kanaan, who will make his 300th start later this month at the Indianapolis 500.

When the Indianapolis Colts punter thought he had found a comfort zone in the Chevrolet Corvette Stingray Z51 during a Friday evening practice session, he would ask his driving coach for approval. Two-time Indianapolis 500 winner Arie Luyendyk told him, “You do good.”

Then McAfee would make a mistake, and Luyendyk would say, “I spoke too soon.”

McAfee’s preparation lasted about 15 laps on the IMS road course. He then took home a map of the layout to study.

“This morning when I woke up, I felt real comfortable,” he said.

McAfee got a real kick out of starting some of the Mazda Road to Indy races Saturday prior to the Verizon IndyCar Series’ 82-lap main event. His confidence continued to grow in what he called “one of the coolest things I’ve ever done.”

“It was never on my bucket list, but it should have been,” said McAfee, who ended up effectively delivering the field to the green flag. “I think it should be on everyone’s bucket list, to drive a racetrack with a racing legend.”

Play ball: Baseball Hall of Fame member Robin Yount was in attendance for the Angie’s List Grand Prix of Indianapolis on Saturday as a guest of Rahal Letterman Lanigan.

Yount and RLL co-owner Bobby Rahal became friends when they were introduced to each other while both were active – Rahal as a driver, Yount as a member of the Milwaukee Brewers, where he played from 1974-93. Yount later became involved in the Formula Atlantic series.

“Through that series, traveling around, running support races, the whole relationship between the Rahal group and myself became closer and closer to the point where I consider us good friends,” Yount said.

“We’ve known Graham since he was a little guy, and he would tell us all about what was happening on the track when his dad was racing. Then, obviously, that has come to fruition for himself, and now we’re cheering for Graham instead of pops.”

Yount remains active in baseball with the Brewers and a summer collegiate team near Milwaukee. And he remains active in racing as a fan, attending a number of Verizon IndyCar Series events each year with the Rahal family. He said this is his first race in 2015, but plans to come to three or four more. He has made several trips to the Indianapolis 500 and attended the inaugural Angie’s List Grand Prix of Indianapolis last year.

Angie’s weekend: Angie’s List is doing more than attaching its name as title sponsor of the Grand Prix of Indianapolis. According to founder Angie Hicks, the company is activating to the fullest by hosting service providers for a weekend of business and fun. Angie’s List is also the primary sponsor on the No. 98 BHA with Curb-Agajanian Honda driven by Gabby Chaves.

“There’s nothing more exciting than to be at the Indianapolis Motor Speedway during the Month of May,” Hicks said. “We’re thrilled to be sponsoring the Grand Prix. We have had our own events going on all day. We brought thousands of service companies in from across the country to enjoy the race with us. We have had conferences with them for the last couple of days. Racing is a great type of event to gather people and clients around.

“Last year we bought tickets for a lot of our employees to come out. Then when the sponsorship opportunity came up, it was a natural. We knew it was a great event and it is the month of May, so it is race time at the Speedway. We are thrilled that race time has expanded through the whole Month of May again. … Every year the Speedway offers a little more for the fans and their enjoyment.”

Tickets for groups of 20 or more also are available. Contact the IMS Group Sales Department at 866-221-8775 for more information.