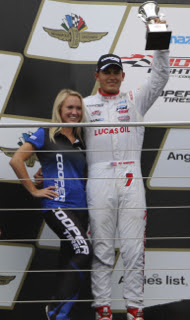 Indianapolis, IN – May 9, 2015 – RC Enerson earned a season-best, second-place finish in the second Indy Lights presented by Cooper Tires race, driving the No. 7 Lucas Oil car for Schmidt Peterson Motorsports (SPM) on Sunday at the Indianapolis Motor Speedway.

Enerson started fifth and fought hard to move up the front. The 18-year-old, American driver was in P3 behind teammate Jack Harvey leading into the last lap of the race. When Harvey had mechanical issues, Enerson advanced one more spot on the podium.

“The end result of the race was good,” said Enerson. “The start was a little hairy. There was a lot of stuff going on and we fell back really far in the field. Then we were able to just pick it up one by one by one. We ended up getting up there with Jack [Harvey] and I was following him through everybody. But then to have him lose power at the end really sucks. I sympathize with him, but it’s one step closer for me to the stop step. That’s what my goal is.

“We’re just learning so much so quickly and I’m looking to just do better and better each race.”

Teammates Harvey, Anderson and Ringel finished P5, P9 and P10, respectively. However, the finish vaulted Harvey to second place in the championship points.

A first-lap, multi-car incident caused some minor damage to the front wing of Hinchcliffe’s No. 5 Arrow Electronics car. He pitted early to change to new red tires and get a new front wing.

The remainder of the race ran caution free and for much of it, both Hinchcliffe and Jakes were on the same fuel strategy. Jakes was the race leader for laps 22-24, with Hinchcliffe leading just past the halfway point. Both teams were confident that a top-five finish was on the horizon.

Unfortunately, the high volume of laps under green lead to an altered strategy and didn’t play out as the team intended. Hinchcliffe finished in P12 and Jakes in P18.

“Obviously not the result that we wanted,” said Hinchcliffe. “We got caught up in that first-corner melee and lost the front wing. From there we were just playing catch-up. The Arrow car was wicked quick – I think we had one of the quickest laps of the race – I really just wish we had a chance to show it.

“We took a gamble on strategy to try and get back up there, and ultimately the yellow never came. We’ve had a couple lucky yellows this year so we can’t be too upset. We’ll take it and move on to the next one. Great job by the boys in the pits and again, getting the car better in race pace, it was awesome.”

Teammate Jakes added, “It was a frustrating day. We were in a good position in the first stint and were able to overtake quite a few cars. We got held up and had to take the escape route at the start because of all the carnage. That didn’t help us but we managed to come out on red tires when everybody was on blacks at the beginning and work our way up through there.

“That’s when we took a bit of a gamble with strategy that just backfired. It’s a shame because the guys were really good in the pit stops and we did everything we needed to do. We just needed a bit of help from yellows that didn’t come. But we’ll move on next week and look forward to the 500.”

In just two days, practice begins for the 99th running of the Indianapolis 500 Mile Race. The Greatest Spectacle in Racing will take place on Sunday, May 24. The Indy Lights presented by Cooper Tires will compete in the Freedom 100 on Friday, May 22.

Fans can get more information and tickets online at IMS.com/tickets or catch all the action live on ABC starting at 11 a.m. ET.