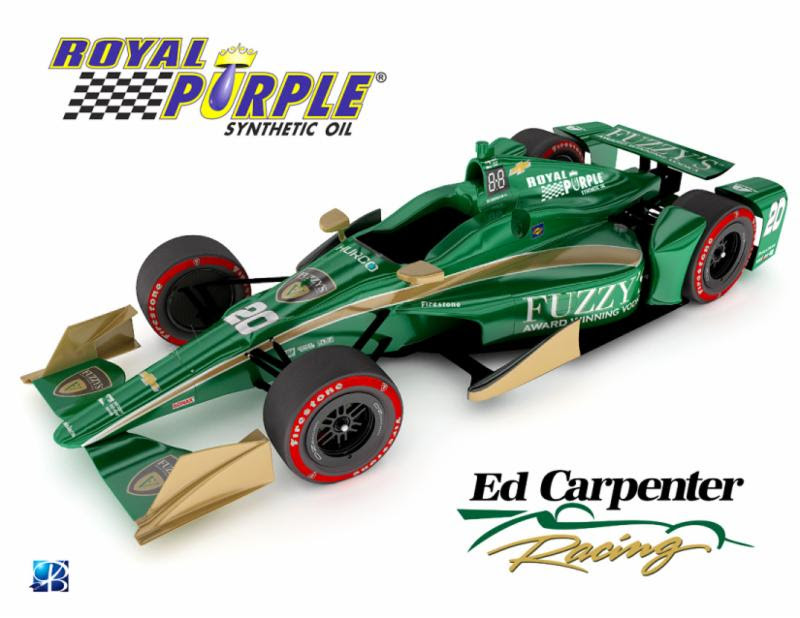 (PORTER, Texas) May 5, 2016 – Just in time for the iconic 100th running of the Indianapolis 500, premium synthetic lubricant and performance chemical manufacturer, Royal Purple®, today announced its sponsorship of the Ed Carpenter Racing Verizon IndyCar Series team for the 2016 race season.

Beginning on May 29, the Royal Purple logo will adorn the engine cover of the Ed Carpenter Racing No. 20 Chevrolet, driven by famed IndyCar racer Ed Carpenter. Throughout his racing career Carpenter has made headlines, including as the first driver to compete in both an Indy Lights and IndyCar event in a single weekend, and for capturing consecutive pole positions at the Indy 500 in 2013 and 2014.

In celebration of its partnership with Ed Carpenter Racing, Royal Purple is launching the 2016 Royal Purple Indy 500 Sweepstakes, offering race fans the opportunity to win a one-of-a-kind Royal Purple racing helmet signed by Ed Carpenter. From May 5 – June 1, fans can enter the sweepstakes by completing the online entry form at www.RoyalPurple.com. Following the close of the sweepstakes’ entry period, one winner will be chosen at random to receive the grand prize.

“We’re thrilled to partner with Ed Carpenter Racing for what’s shaping up to be the most exciting running yet of the Indy 500,” said Royal Purple Vice President of Marketing, Debby Neubauer. “Ed Carpenter is one of the most skilled drivers in the world, and we look forward to helping him outperform in ‘The Greatest Spectacle in Racing.’ We’re also proud to share our excitement with race fans through our Indy 500 sweepstakes.”

For more information on Ed Carpenter Racing, as well as a complete schedule of events where the team will be competing throughout 2016, please visit www.EdCarpenterRacing.com.