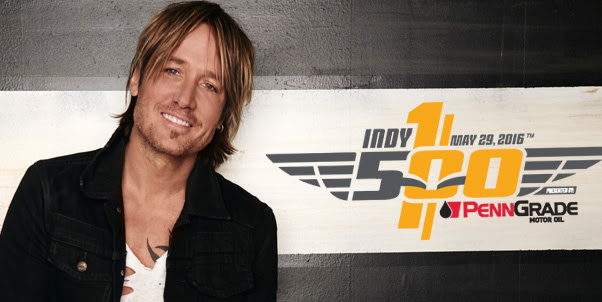 INDIANAPOLIS, Thursday, May 5, 2016 – Four-time GRAMMY Award winner Keith Urban will roll off with the field of 33 drivers at this year’s 100th Running of the Indianapolis 500 presented by PennGrade Motor Oil. He will be Mario Andretti’s passenger in the custom-built two-seat Indy car billed as the “Honda Fastest Seat In Sports.”

Andretti and Urban will follow four parade cars and lead the official Pace Car on three parade laps leading up to the most famous race in the world. Once Andretti and Urban exit the circuit, the field of 33 cars will take the green flag. The race will air live on ABC at noon ET on May 29.

“I inherited my love of cars from my dad,” Urban said. “We used to take family driving trips purely for the love of driving. They’re also featured heavily in a bunch of my songs, including some on my new album RIPCORD. For me they symbolize freedom, independence, adventure and so much more. The Indy 500 is one of the true iconic motorsport events and to get to drive with a legend like Mario (Andretti) in this 100th race is indescribable and something I wish my dad could’ve seen!”

Indeed, it will be memorable. Urban, whose eighth studio album RIPCORD will be released on Friday, May 6, will round the historic Indianapolis Motor Speedway while travelling the length of a football field in less than a second. To capture the experience, the Honda Fastest Seat in Sports Indy car will be equipped with cameras and a microphone to record every moment of Urban and Andretti’s famous lap. All racing enthusiasts have the chance to win a two-seat ride leading the start of a Verizon IndyCar Series race with Andretti by participating in Honda’s “Fastest Seat in Sports” sweepstakes here: http://racewithhonda.com/.

Andretti is a huge fan of Urban. “Keith and I are going to have some fun,” Andretti said. “He will make the 100th running of the Indy 500 a memorable day for me and my Honda Fastest Seat in Sports crew. Then, I’m going to his live show in Hershey, Pennsylvania, in November and I’ll have some fun on his turf. I want to see him play some ridiculous guitar, sing his heart out, and maybe even change the lyrics to his hit song about falling in love in the back of a ‘Cop Car’ to something about riding with me in the back of a race car. It’s all just good fun. But first … the Indy 500 is the greatest day in racing, and to have a powerhouse like Keith along for the ride will make it greater.”

Urban’s RIPCORD has already produced the superstar’s 19th (“John Cougar, John Deere, John 3:16”) and 20th (“Break On Me”) career No. 1 songs. His current single, “Wasted Time”, is one of the fastest-moving chart songs of his career. The album features a virtual Who’s Who of GRAMMY Award-winning writers, performers and co-producers, including Pitbull, Carrie Underwood, Nile Rodgers, Jeff Bhasker, Dann Huff, busbee, Greg Wells and more.

Long hailed as one of the industry’s best live performers, Urban returns with his first arena/amphitheater tour in two years. His “ripCORD World Tour 2016”, which kicks off just four days after Indy, on June 2 in Kansas City, Missouri (the third stop is Klipsch Music Center in Indianapolis June 4), will thus far visit Canada and Australia. It will play to more than 50 U.S. cities.

Mario Andretti won just about everything: The Indy 500, the Daytona 500, the Formula One World Championship and the Pikes Peak Hillclimb. He won the IndyCar Championship four times and was a three-time winner at Sebring. He won races in sports cars, sprint cars and stock cars – on ovals, road courses, drag strips, on dirt and on pavement. He won at virtually every level of racing since he arrived in America from his native Italy at age 15. Assessing his legacy is easy: He drove the careers of three men. He drove with a passion and joy that few have equaled, and he won. Mario Andretti took the checkered flag 111 times during his career – a career that stretched five decades. He retired from active driving at the end of 1994. Now a successful businessman off the track, Mario serves as spokesman, associate and friend to top executives around the world.