Posted by Steve Wittich on Wednesday, May 4th 2016 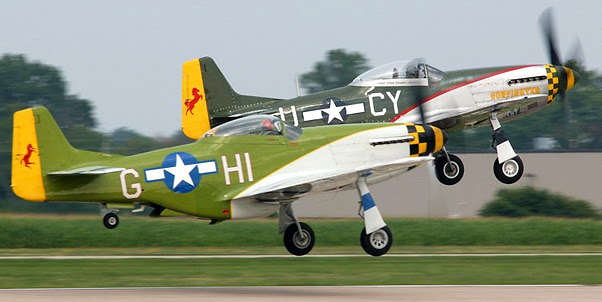 INDIANAPOLIS, Wednesday, May 4, 2016 – This year, as the historic 100th Running of the Indy 500 presented by PennGrade Motor Oil prepares to celebrate decades or racing innovation, pre-race festivities will take on a similar theme with two special flyovers. The first will feature historical World War II-era military planes while the second will feature state of the art F-18E Superhornets piloted by the U.S. Navy.
“The 30 minutes before the green flag drops are always my favorite time of the year,” said IMS President J. Douglas Boles. “This year’s flyovers will be thrilling, and represent the perfect blend of past and present we’re celebrating at the 100th Running of the Indy 500.”

The first flyover will include two planes that saw action during critical World War II missions: a Douglas SBD-5 and P-51 Mustang. It will be carried out in collaboration with the Commemorative Air Force, an organization founded to acquire, restore and preserve in flying condition a complete collection of combat aircraft which were flown by all military services of the United States.

The SBD was the only U.S. combat aircraft to fight from the beginning of World War II until the end. Considered the most destructive air weapon of the U.S. Navy, the SBD sank over 300,000 tons of enemy ships, a greater tonnage of Japanese shipping than any other Allied aircraft during the war. In the skies over Pearl Harbor, the SBD was the first American combat aircraft to shoot down a Japanese Zero fighter.

The P-51 Mustang is an American long-range, single-seat fighter that saw action during World War II and the Korean War. It was first commissioned in 1940 and has a top speed of 437 mph.

The second flyover will involve a single-pass in a four-plane formation at 300-350 mph. The F-18E is a single-seat variant that deploys on carriers and provides precision air to ground support, along with the ability to protect carriers from any airborne threats. The top speed of navy fighter pilots flying an F-18E is approximately Mach 1.8.

The squadrons carrying out the flyovers – VFA-81 and VAQ-139 – most recently wrapped up a 10-month deployment in the Persian Gulf assisting the fight against ISIS. It was the longest deployment for the two squadrons attached to CAG-17 since the Vietnam War. VFA-81 is based out of Naval Air Station Oceana in Virginia Beach, Virginia, while VAQ-139 comes from Naval Air Station Whidbey Island based in Washington State.