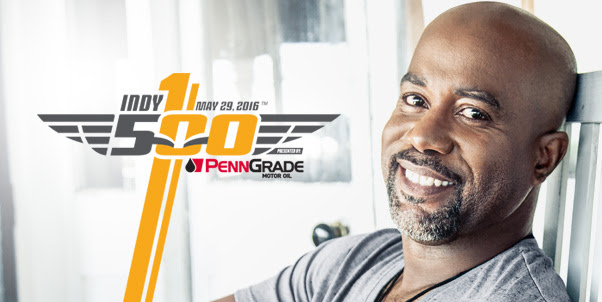 Rucker will sing in the traditional spot on “500” Race Day before the 33 drivers are called to their cars and the singing of “Back Home Again in Indiana.”

“With just over a month until our historic 100th Running, we are pleased to announce
Darius Rucker will perform the national anthem on Race Day,” said J. Douglas Boles, Indianapolis Motor Speedway president. “Darius has a unique set of skills as a musical artist and connects on a personal level with fans across the globe. We know he’ll deliver a performance befitting such a monumental day and help ensure this year’s pre-race, my own favorite time of the year, is an unforgettable experience.”

Rucker first attained multi-platinum status in the music industry as former lead singer and rhythm guitarist of GRAMMY-Award-winning Hootie & the Blowfish. Since re-introducing himself to the world as a country artist, he has released four consecutive albums to top the Billboard Country albums chart and earned a whole new legion of fans.

“I’m honored to sing the national anthem at the Indianapolis 500 and to be invited to celebrate the milestone of the 100th Running,” said Rucker.

In 2014, Rucker won his third career GRAMMY Award for Best Solo Country Performance for his triple-platinum selling cover of Old Crow Medicine Show’s “Wagon Wheel,” off his album “True Believers.” Rucker’s first two country albums, “Learn To Live” and “Charleston, SC 1966” produced five No. 1 singles including “Come Back Song,” “This,” “Alright,” “It Won’t Be Like This For Long” and “Don’t Think I Don’t Think About It.”

The 100th Running of the Indianapolis 500 presented by PennGrade Motor Oil is May 29. This year, fans are encouraged to get to IMS in the early morning hours to take advantage of the full 100th Running experience. Highlights include live SportsCenter tapings in the plaza beginning at 8 a.m. and an expanded Fan Midway. Stay tuned for more updated on early pre-race opportunities as the 100th Running countdown continues.