THE WINNING BIDDER WILL OWN THE ANDRETTI AUTOSPORT® NO. 28 DHL HONDA DALLARA DW12 CHASSIS AND ENJOY AN “OWNERSHIP EXPERIENCE”
WITH THE ANDRETTI TEAM FOR ITS REMAINING RACING YEARS 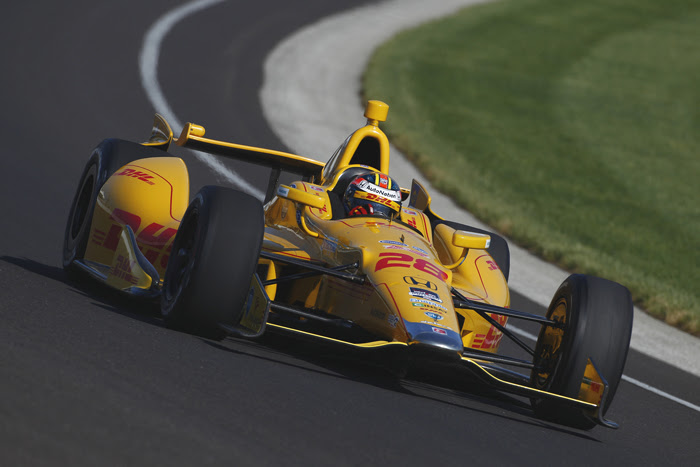 This unique auction lot presented by Gooding & Company delivers to the winning bidder the Verizon IndyCar Series chassis driven to a dramatic win at the 2014 Indianapolis 500 by Ryan Hunter-Reay, one of the most prolific American drivers of his generation. Andretti Autosport will provide the buyer with two season-long VIP credentials and team hospitality passes granting gate, garage, and limited pit access for each of the Verizon IndyCar Series race event held through the 2018 season, including the Indianapolis 500. The package will also include four single-event VIP guest credentials and team hospitality passes at each of the IndyCar races that Andretti Autosport competes in through 2018, with additional options available for the Grand Prix of Indianapolis and Indianapolis 500.

“I’m excited to team up with Gooding & Company on this really unique collaboration. The opportunity to auction off our 2014 Indy 500 winning – and still active – race car and provide the winning bidder with an immersive ownership experience with our team delivers a great way to celebrate an iconic moment in our team’s history as we prepare for the 100th Running of the Indianapolis 500,” said Michael Andretti, President, Chairman and CEO, Andretti Autosport. “Indy car racing has always pushed the envelope when it comes to innovation, and we feel this is the next step of doing the same off of the track.”

Introduced for the 2012 IndyCar season, Andretti Autosport provided chassis DW12-057 toRyan Hunter-Reay, who has been racing for Andretti since 2010, and has won at least one race in each of his seasons with the team. Since the race car’s debut season, Hunter-Reay won the 2012 Verizon IndyCar Series championship and four series race wins with this car, including the historic 2014 Indianapolis 500, where the car won in a thrilling wheel-to-wheel finish. With at least three more race seasons to go, Ryan Hunter-Reay and the No. 28 car are in the hunt for future IndyCar championship seasons and when the chassis retires, No. 28 will be delivered to the winning bidder in the 2014 Indianapolis 500 aero kit and livery.

“Millions of fans around the world witnessed a legendary finish in 2014 as Ryan claimed victory and became the first American in eight years to win the Indy 500,” states Douglas Boles, President, Indianapolis Motor Speedway. “The chance to own Ryan’s winning car, an iconic piece of racing history, is a priceless opportunity and offering the car at the Gooding & Co. auction is a fantastic way to build excitement for IndyCar’s return to Phoenix International Raceway on April 2 and to help countdown toward the 2016 IndyCar season and the 100th Running of the Indianapolis 500.”

This seasoned and accomplished race car will be on display beginning Wednesday, January 27th at the Gooding & Company viewing marquee. The display will also feature the iconic Borg-Warner trophy, on loan from the Indianapolis Motor Speedway Hall of Fame Museum, as it makes a tour of the southwestern United States in advance of the Verizon IndyCar Series return to Arizona for the Phoenix Grand Prix on April 2nd, as well as the 100th Running of the Indianapolis 500 on May 29th.

Bidder Registration:
$200 includes a catalogue, admission for two to the viewing and auction with two reserved seats, subject to availability.