Posted by Patrick Stephan on Friday, May 22nd 2015 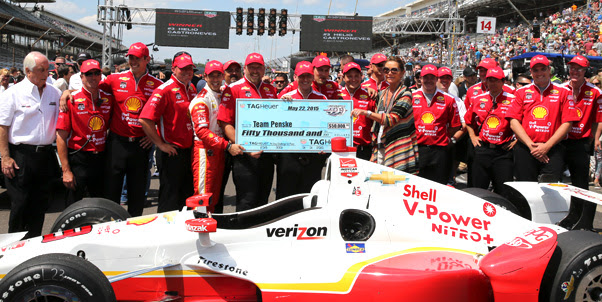 INDIANAPOLIS, Friday, May 22, 2015 – The long-running epic battle between Team Penske and Chip Ganassi Racing jumped from the track to pit lane on Friday to decide the winner of the 2015 TAG Heuer Pit Stop Challenge during Coors Light Carb Day at the Indianapolis Motor Speedway.

When the smoke cleared, it was three-time Indianapolis 500 winner Helio Castroneves and his Team Penske crew winning in 12.561 seconds in the No. 3 Shell V-Power Nitro+ Team Penske Chevrolet over Charlie Kimball and his No. 83 Novo Nordisk Chip Ganassi Racing Chevrolet squad, who finished the contest with a time of 13.017 seconds.

“This is just perfect,” Castroneves said. “We started the month great and had a little blip on the radar with that accident going out, but we’re back on track. The Shell V-Power car was unbelievable and these guys, it’s unbelievable. For us it’s nerve-wracking because you don’t want to screw up. Just a great effort from Team Penske.”

In two of Castroneves’s three Indianapolis 500 victories, he also won the Pit Stop Challenge (2002, 2009). Will that happen again on Sunday?

“I tell you what, I believe in any omen right now and if that’s where it takes it, I’ll believe it, but at this point it’s just great, fantastic effort by the Shell V-Power Nitro+ boys, great job everyone,” Castroneves said.

In reaching the final for the first time, Kimball and his crew – who earned the runner-up reward of $15,000 — had an impressive run in defeating two-time defending champion Scott Dixon and the No. 9 Target Chip Ganassi team in the quarterfinals, and Marco Andretti and his No. 27 Andretti Snapple Honda squad in the semifinals.

Twelve Verizon IndyCar Series teams competed in head-to-head competition in four rounds of exciting pit stop action. Each team was timed while performing a pit stop that required crews to change four tires and execute a simulated fuel hookup during each round of competition. Teams with the fastest time advanced to the next round.

Will Power, driver of the No. 1 Verizon Team Penske Chevrolet, topped the speed chart at 229.020 mph. Scott Dixon, Sunday’s polesitter, was second at 228.585 in the No. 9 Target Chip Ganassi Racing Chevrolet. The top Honda was Takuma Sato, fifth on the chart at 228.242 mph.

“You’re just kind of doing little tweaks here and there, pit stop practice, practicing coming into the pit off (Turn) 4,” Power said. “It’s just those type of things, getting in the groove for the race.”

Power won the Angie’s List Grand Prix of Indianapolis two weeks ago on the IMS road course and will try to become the first to sweep both May races.

Driver change: Driver Carlos Huertas has been ruled out of the Indianapolis 500 with an inner ear condition, according to Dr. Terry Trammell, INDYCAR medical consultant. Huertas will have to undergo further evaluation before being cleared to return to Verizon IndyCar Series competition.

Huertas was scheduled to start 18th in the No. 18 Dale Coyne Racing Honda. Tristan Vautier, the 2012 Indy Lights champion and 2013 Verizon IndyCar Series Rookie of the Year who qualified the No. 19 Coyne entry for the “500” May 17 while filling in for James Davison, was named to replace Huertas in the No. 18 car.

“It was a bit of a rollercoaster of emotions,” Vautier said on Friday after Carb Day practice. “I knew if James was getting the deal with them, I would qualify (the car). That was the first good news.

“Then, yeah, on this one, it’s not really the way you want to get back in the car, honestly. I think Carlos deserves to be racing because he did a really good job in qualifying and on practice. Obviously you can’t help but be excited to start your second Indy 500.”

Freedom 100: Jack Harvey of Schmidt Peterson Motorsports with Curb-Agajanian won the Freedom 100 under caution and made a little history in the process. He won one of the doubleheader races on the IMS road course earlier in the month, so he is the first driver to win on both the IMS oval and current road course configuration.

Start him up: Justin Wilson’s No. 25 Andretti Autosport Honda picked up a unique sponsorshipon Friday – The Rolling Stones. The band, playing around the country this summer on its ZIP CODE tour including July 4 at IMS, will have full tour livery on Wilson’s car.

“I’m really excited to have the Rolling Stones on the side on the No. 25,” said Wilson, who, like the band, hails from England. “For the biggest race of the year, to have one of the biggest rock bands in history is just incredible. Listening to the Rolling Stones was a Sunday tradition in our house. We would wake up and my Dad would have the music on full blast.”

Tickets and VIP packages for the Stones’ show at IMS are on sale at IMS.com.

Legends Day: Saturday at IMS is Legends Day honoring Al Unser presented by Firestone, and the legend himself always loves to return even though his last “500” was 1994.

“Indy’s a place that has so much to it and enthusiasm around it,” the four-time winner said. “It gets me hyped up as many years as I’ve been retired from it. It just shows that it’s a race that you want to win and want to do well in.”

“With the success we’ve had, it’s just a great feeling,” Unser Jr. said. “It’s hard to put into words. Indy means our life. That is what it means to the Unser family.”

“I just looked at all the history and kind of wanted to bring some of the old tradition back,” said Lee, who first visited the Speedway as a child in the late 1970s and painted teams’ fuel tanks. “I just took their logo and did my interpretation of it. I’m super-proud to be able to do the art for the cover.”

Lee’s work is embraced across racing genres. At this Sunday’s race, past “500” champions Helio Castroneves, Scott Dixon and Juan Pablo Montoya will be among the drivers wearing helmets featuring Lee’s custom designs.

“We try to do the top seven or eight guys in each sport, which is my goal – Motocross, mountain bike, IndyCar, NASCAR,” Lee said.

The “500” program is bundled with the 2015 Angie’s List Grand Prix of Indianapolis program and sold for $15 at various retail outlets around IMS and on shop.IMS.com.

Winning wrench: Roy Wilkerson, chief mechanic for the No. 63 Dale Coyne Racing Honda, is the 2015 recipient of the Clint Brawner Mechanical Excellence Award.

“When I was a kid, Clint Brawner was one of the guys you heard about and wanted to emulate and wanted to be as good as,” said Wilkerson, a mechanic since 1984 when he began with Jack Roush in Trans-Am cars. “It’s an absolute honor to be the recipient of an award named after him.

More: Friday’s national anthem was sung by JAX, a singer/songwriter from New Jersey and the third runner-up on Season 14 of “American Idol.” … Marine Staff Sgt. Liam Dwyer, who races in IMSA despite having lost much of his left leg from an IED in Afghanistan, waved the green flag for Friday’s Freedom 100. … The Winners Drink Milk Award, presented annually by American Dairy Association Indiana, was reconfigured last year from a plaque into a trophy. Earlier this year, the trophy captured first place in the “Most Creative” category in a competition among trophies from around the world at the International Awards Market in Las Vegas.

Tickets for groups of 20 or more also are available. Contact the IMS Group Sales Department at866-221-8775 for more information.