Fontana, CA – June 27, 2015 – James Jakes drove a consistently solid race at Auto Club Speedway on Fontana and earned a seventh-place finish at the MAVTV American Real 500. Teammate Ryan Briscoe was on his way to a potential victory when contact ended his incredible run just a few laps too early.

Jakes, whose No. 7 MAVTV MediaTech Oculus car had an engine failure prior to Friday’s qualifying session, was unable to make a qualifying attempt. The team changed the engine before qualifying but just missed the deadline for technical inspection. He started the race in the 23rd spot.

During the 500-mile race under the hot, California sun, Jakes managed to stay out of the latter-half chaos of the race. He had gained eight spots in just the first 10 laps of the race and was running as high as sixth place near the 200-lap mark. Solid pit stops and patience earned him a spot inside the top ten.

“It was just a fun day, really,” said Jakes. ” We started at the back and improved to seventh. I think we could’ve had a podium there but it just didn’t quite work our way with the two stops towards the end.

“Obviously it was an unlucky one for the No. 5 car. They were having a great run as well and just got involved in an incident there. I think Ryan’s okay so that’s good.

“A big thanks to the No. 7 MAVTV MediaTech Oculus crew on this one. My pit stops were awesome, every time I came in the pits we gained positions. It’s just good to get some points. We have strong oval cars and we’re looking forward to the next few races.”

Briscoe was fastest in the first practice session of the weekend and second in the combined practice results. “A bit too much downforce” in the qualifying setup of the No. 5 Arrow Electronics car resulted in a 16th-place qualifying position for the Australian driver.

The engine on the No. 5 car had reached its maximum mileage after the qualifying attempt so the crew installed a new power plant at the end of the day on Friday.

In the first ten laps of the race on Saturday, Briscoe advanced from 16th to fourth, including a four-car pass in a single turn. He was up to second place just before the halfway point of the race. Contact with another car on lap 136 resulted in rear wing damage and a drive-through penalty. From that point forward, he was consistent and worked his way to the front, where he lead three laps at two different times.

With eight laps left in the race, a red flag was thrown after an on-track incident, giving the field three green laps to finish the race. When just one lap remained, Briscoe was collected when the car of Ryan Hunter-Reay was spun around, and finished the day in 15th place.

“It was a really exciting race, to say the least,” said Briscoe. “I had a really good car and was able to make the low line work. We passed a lot of guys down there so it was fun to be up front. Coming through the field a couple of times, it was awesome. I was really enjoying myself and I was able to be aggressive.

“With a lap to go, in our position, I had some momentum coming down the front stretch. I was going to take that low line into one and two, and felt like we were going to come home with a top three, for sure. Unfortunately, Hunter-Reay got turned around, I had nowhere to go and she went flying. Thankfully, I’m alright and no big deal. Now we look forward to the next one.”

In two weeks, the Verizon IndyCar Series heads to Wisconsin for the twelfth race on the 2015 circuit. The ABC Supply Company Wisconsin 250 will take place on Sunday, June 12 at the historic Milwaukee Mile. The 250-lap race will be broadcast live on NBC Sports Network from 5-8 p.m. ET and tickets are available at MilwaukeeIndyFest.com. 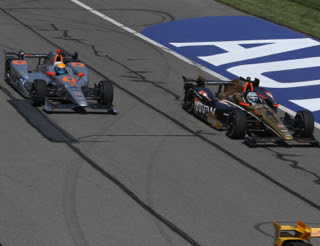