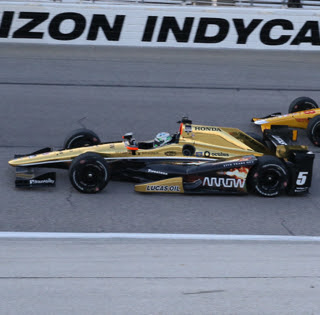 Briscoe, filling in for the injured James Hinchcliffe in the No. 5 Arrow Electronics car, started the 248-lap race from the nineteenth spot on the starting grid. He gained six spots in only the first 15 laps of the race.

The Australian driver ran as high as fourth and stayed focused during a wheel-to-wheel race that saw only one caution flag (debris) on lap 84. The Arrow Electronics crew executed five solid pit stops.

“It was a really good effort,” said Briscoe. “I was pleased to be able to move our way through the field and it was a lot of fun. I had a really good car and I’m really proud of the effort by the whole Arrow Electronics team, their pit stops are impressive. We were constantly talking throughout the race to make improvements on the balance and we had to work with it a lot but I was really happy.

“I’m not sure what happened at the end, I was hoping for a top five finish but I think the strategy kind of played out a little bit differently. We dropped a couple of spots right at the end but it was a great effort.”

By lap 75, both SPM drivers were running in the top ten.

Teammate Jakes started the race in the twelfth spot. His run on the 1.5-mile oval was consistent as he worked his way forward to as high as eighth. When the checkered flag dropped, he finished ninth.

“We said we wanted to get top tens until the end of the year but honestly, I’m a little bit disappointed with ninth,” said Jakes. “I felt we had a better car than that and the No. 7 SPM MediaTech Honda was pretty solid. The crew did a great job all night and we just came up a bit short by going off strategy like that. We can still count it as a good finish and add some points. Now we move on to Toronto.”

In one week, the Verizon IndyCar Series will be joined by the Indy Lights presented by Cooper Tires Series as both head north of the border to Toronto, Ontario, Canada. The Indy Lights races will take place on Saturday and Sunday, while the Honda Indy Toronto IndyCar race will headline the weekend on Sunday, June 14 from 3-6 p.m. ET.

Conor Daly will fill in for Hinchcliffe as pilot of the No. 5 Arrow Electronics Indy car. Tickets are still available online at HondaIndyToronto.com and fans can catch all the action live on NBC Sports Network.