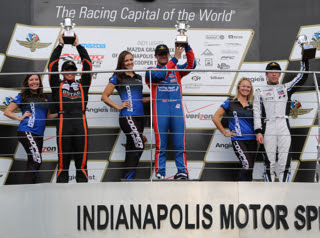 Indianapolis, IN – May 8, 2015 – Jack Harvey earned a first-place finish for Schmidt Peterson Motorsports (SPM) from the pole position in his No. 42 Racing Steps Foundation car on Saturday afternoon during the first of two Indy Lights presented by Cooper Tires races at the Indianapolis Motor Speedway.

Leading into the weekend, Harvey had earned four podium finishes out of five races and was eager to get the top spot.

“It was obviously a fantastic day and we’ve been working hard all season for this,” said Harvey. “I feel like this was coming for awhile. Long Beach was going to be a great weekend but then the drama happened. I think my team has done a really good job of putting that behind us and moving forward to a second place in Barber.

“We’ve come to Indy with pretty high expectations and so far we’ve achieved all of them. I just can’t thank the guys enough for giving me a car good enough to win. I’ve said it all year but I truly believe in my team and now we were able to show it.”

SPM’s IndyCar drivers James Hinchcliffe and James Jakes qualified earlier in the day on Saturday for the Angie’s List Grand Prix of Indianapolis, taking place on Sunday. Hinchcliffe narrowly missed the cutoff for the second round of qualifying and will start in P13.

“It’s getting harder and harder to judge what a successful qualifying is,” said Hinchcliffe. “It’s always a challenge when you go out on these reds, trying to figure out where the grip is. Here, for most people, at least in the first group, it was the first lap.

“We made quite a lot of changes after practice – we weren’t super happy in practice three – and got the car a lot better. Credit goes to the guys because I think the Arrow Electronics car was a lot stronger in qualifying. If the reds had held on for a second lap, I think we would’ve been able to find a little bit more and maybe squeak into the top twelve.

“The good news is that we’re going to be one of the top guys with a second set of reds and if there’s a strength that we’ve shown this year, it’s being smart on strategy. So we’ll take our tire advantage and try to use that to race smarter, not harder, and move up the grid tomorrow.”

“It’s just very frustrating,” said Jakes. “Under the circumstances, I think we’re doing a pretty good job. The No. 7 MediaTech crew is working very hard and I just wish the qualifying result reflected that effort. Either way, I’m looking forward to racing in my first Grand Prix of Indy tomorrow and hopefully we’ll get some rain during the race too.”

Sunday’s schedule at IMS will feature the second Indy Lights race and the Angie’s List Grand Prix of Indianapolis. Anderson, Enerson, Harvey and Ringel will get a second chance at 1:25 p.m. ET on the 14-turn, 2.434-mile road course.

Afterwards, Hinchcliffe and Jakes will compete in the 82-lap race to officially kick off the month of May. Fans can catch all the action on ABC from 3:30-6 p.m. ET or get tickets online at IMS.com.