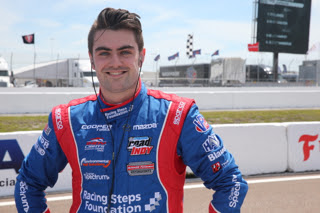 Harvey started the first of two Grand Prix of St. Petersburg races on the inside of row two and made a pass at the start to advance to P2. He defended the position on the 11-turn, 1.968-mile temporary street circuit.

“It was a good race,” said Harvey. “We started third and finished second so I can’t really complain. Honestly, second is good but we’ve come to win and all the guys know that. The rest of the field knows that. I’m not really satisfied right now but I’m sure we’ll keep working and the win will come together.”

Hinchcliffe, driver of the No. 5 Arrow Electronics car, will start 14th. Jakes will start 16th in the No. 7 MediaTech Advertising car.

“I’m obviously pretty gutted not to make it out of the first qualifying session,” said Hinchcliffe. “That’s not what I’m used to or what this team is used to. Certainly there’s some areas for improvement but it’s not due to lack of trying. We’ve been working so hard this weekend and over the last couple of tests to get the Arrow Electronics car dialed in. It’s just a little bit far from where we need it right now but it’s not a long way. When you look at the times, it’s just a small change that will give us what we need to jump up a few positions.

“We’ll look at it overnight and learn a bit more in warmup tonight but we’ve got a bit of a strategy advantage with an extra set of reds. Not to say we wouldn’t rather be a little further up the grid but that’s the situation we’re in and hopefully we’re going to come together with a good package tomorrow. With some quick driving, good pit work, good strategy, we’ll get up there.”

Jakes commented, “It was a very difficult day, to be honest. It’s a shame but we’re making progress with the No. 7 SPM MediaTech car. We have a little bit more work to do. Hopefully we can have a good race tomorrow and move forward. Our goal is to get some solid points and develop a good baseline to continue the season with.”

The Firestone Grand Prix of St. Petersburg will take place on Sunday, March 29 with the green flag scheduled to drop at 3 p.m. ET. Fans can get more information and purchase tickets at www.GPStPete.com or watch the race live on ABC.

About Schmidt Peterson Motorsports:
Schmidt Peterson Motorsports (SPM) was established in 2001 and is owned by former IndyCar driver Sam Schmidt and Canadian businessman Ric Peterson. Schmidt was paralyzed (quad) in 2000 after an accident during testing at Walt Disney World Speedway in Orlando, Fla. SPM fields cars in the Verizon IndyCar Series, including the Indianapolis 500, and the Indy Lights Series presented by Cooper Tires. SPM is the most successful team in Indy Lights Series history with sixty-five race wins and seven championships. In addition, SPM won the coveted Indy 500 pole position in 2011, and has won four Verizon IndyCar Series races in 2013 and 2014.