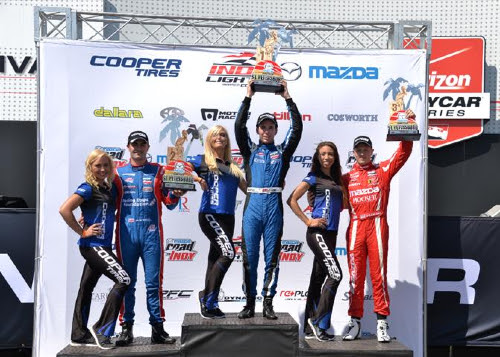 The Dubai born and raised driver secured pole this morning and broke the track record that was set by Verizon Indycar Series driver James Hinchcliffe in 2010. Jones set a lap of 65.3193 seconds, which was over a second faster than old time.

Driving the No. 11 Toys for Boys Miami/United Rivers – Carlin car, Jones had a great start and was able to quickly pull away from the field. At one point he had a lead of nearly five seconds over second place Jack Harvey, but towards the end raced conservatively to bring home his and his team’s first victory.

Commenting on the win today, the 20-year-old said, “It was a good start for me. I got the jump on Max and from there it was just about keeping my head down and getting the laps in. Later into the race it was a matter of keeping the car stable and not going too hard on power. I had a massive moment near the end, in the double right-hander. I got very close to the wall, but I managed to keep hold of it. After that, it was fine. You could really feel the difference with the push-to-pass feature. I didn’t have to use it to pass today but for overtaking in the future, it will really help out. Now we’ll work with the engineers and try to make it better for tomorrow.”

Jones made the switch to Indy Lights and the USA at the beginning of the year after becoming the youngest winner of the Euro F3 Open Championship in 2013. Last year, despite missing three races mid-season races due to back injury, he still earned two podium finishes in the FIA European Formula 3 Championship with Carlin.

Founded by former Formula One driver and TV pundit, Mark Blundell, MB Partners brings together a unique team with Blundell as CEO, Theo Paphitis as Chairman and Ian Childs as MD. As a long-term star of the BBC’s Dragons’ Den Paphitis is one of the UK’s most well-known entrepreneurs and retailers. Meanwhile Childs brings a fantastic network of sporting and commercial contacts from his time at Movie & Media Sports and Octagon’s Far East & Australasian operations. For more information, please go to www.markblundellpartners.com.